Will Pakistan be bailed out by IMF?

Pakistan is too important a country to be ignored. Plus, Pakistan is a key battlefront in Cold War II - US vs. China. An IMF loan for Pakistan will be an easy win for the US. Pakistan’s new government is looking to dis-engage from Chinese money.

Here is a report from the Wall Street Journal. For IMF Help, Pakistan Might Have to Disclose Its China Debts

While Mr. Khan’s administration has been careful to say it supports the Chinese program, it also has quietly started a reassessment of it.

On Thursday, Mr. Khan singled out a $1.6 billion loan taken from China to build a metro rail service for the eastern city of Lahore. Mr. Khan said it “isn’t creating wealth but creating a deficit.”

So, an IMF loan is the most acceptable option for Pakistan. Yes, it will have to move politically towards the US, but fixing the economy is more important than political pride.

So, Pakistan will come to an agreement with the US that will allow the IMF to make a conventional loan to Pakistan.

Note that I did not use the word ‘bailout.’ It’s not a meaningful word. The IMF gives loans, not bailouts. You have to pay them back, and agree to do many things. Let’s call it a conditional loan.

While the IMF will not talk about political relations with India, it would be in Pakistan’s interest to start serious discussions with India’s new government after the 2019 elections. There’s much economic gain in that - a ‘peace dividend’ that would be particularly important for Pakistan’s economy.

I had written above: “Pakistan will come to an agreement with the US that will allow the IMF to make a conventional loan to Pakistan.”

I think such an agreement is on its way - more favorable to Pakistan than to the US.

So, the real issue between Pakistan and IMF will be economics, not politics.

Pakistan’s finance ministry and the IMF are due to resume discussions later this month on details of the package, which is expected to come with tough conditions, such as slimming down the country’s bloated state-owned enterprises through job cuts.

China has pledged to lend at least $2bn to Pakistan to shore up its foreign exchange reserves and prevent further devaluations of the rupee against the dollar, two senior government officials have told the Financial Times. The financial support, which is not being publicly announced by China, comes as the government of Prime Minister Imran Khan is struggling with a weakening fiscal position, high debt repayments and dwindling reserves. 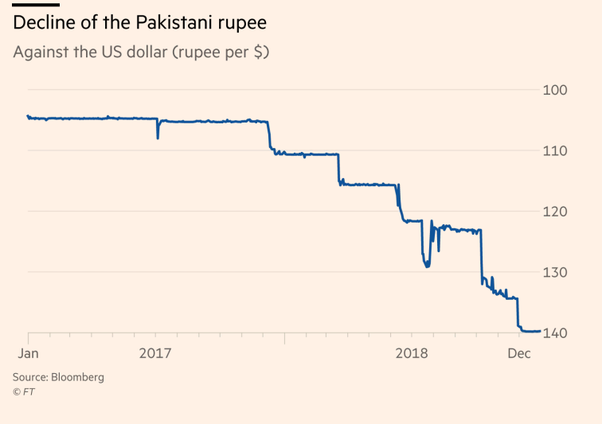 In other words, while Pakistan is continuing to borrow money form various countries, Pakistan is still in discussions with the IMF.

The IMF bailout is still likely to take place. It will ask for reductions in government expenditures - which is the norm for the IMF. It will be tough for Paksitan to implement the austerity conditions - as it is for any country bailed out by the IMF.

Pakistan and the International Monetary Fund (IMF) will soon reach a bailout deal with a potential size of $12 billion, but the south Asian country is expected to have an increasing pressure to improve fiscal consolidation through austerity measures, Fitch Solutions said.

Early indications suggest that Pakistani authorities requested aid of $12 billion, which is almost twice as large as the previous bailout package of $6.6 billion in 2013.”

Fitch Solutions said measures to strengthen the country’s fiscal and debt dynamics will likely be a major cornerstone of the IMF deal, with the end goal of narrowing the budget deficit and stabilising the debt-to-GDP ratio through austerity measures.