What was the effect of liberalization on India's exports?

Since liberalization our trade foreign trade has expanded manifold and has seen significant structural shifts in product as well as geographic composition. The share of foreign trade (export & import) in India’s GDP stood at 13-15 % against 43% now. Let us see how liberalization has helped exports.

Our Trade has expanded

India, which had a global share of 2.4 per cent in trade at the time of independence, dropped to a mere 0.7 per cent in 1991 because of inward looking policy of self-reliance and exporting only the surplus. The balance of payment crisis in 1991 resulted in opening up the economy and a new foreign trade policy that resulted in India’s two way trade in both merchandise and services reach nearly $ 1 trillion annually from a mere $70-80 billion in 1991. India’s share in global merchandise trade has gone up to 1.7 per cent in 2013-14 from 0.7 per cent in 1991. 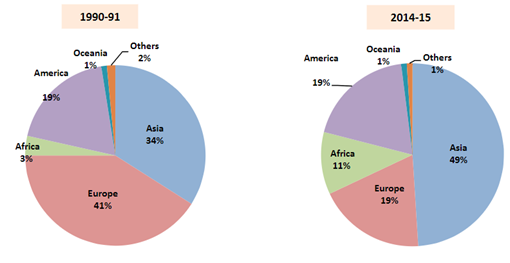 The composition of exports has gone substantial changes since liberalization. There is a structural shift in India’s exports, away from primary, agricultural and traditional exports like textiles towards more value added manufactured and technology-based items such as engineering goods, refinery products, pharmaceuticals, etc. Overall, India’s export basket is now diversified with non-traditional items and differential products are also gaining importance