What is the expected future GDP in India? 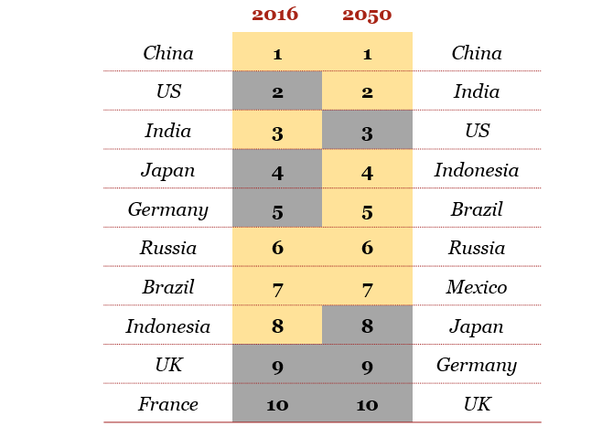 China is expected to be at the 1st position in 2050. while India will overtake GDP of United States by 2045 and will eventually overtake China by the year 2080. While the US’s economy will not be able to grow as fast as that of India’s and China’s its share in the world economy will begin to shrink.

The US is currently the world’s largest economy will a GDP of over 19.4 trillion US$

The Chinese economy is predicted to grow at an annual average rate of 4 to 5% by 2050 which will make it the world’s largest economy by 2032 (by overtaking the United States) and remain at 1st spot till 2060 at least with a GDP of 58.1 billion $.

China is currently the world’s largest economy in PPP terms having an 18% share of the world economy.

India is growing fast at an average rate of 6.5 to 7 % in the past 10 years, in fact, it is the fastest growing major economy in the world along with China and is expected to grow at this rate of many years to come.

It is expected that India will maintain a steady growth rate of around 5.5% for the next 5 to 6 decades and will overtake the economy of United States by 2045 and will eventually overtake China by 2070 to become world’s largest economy.